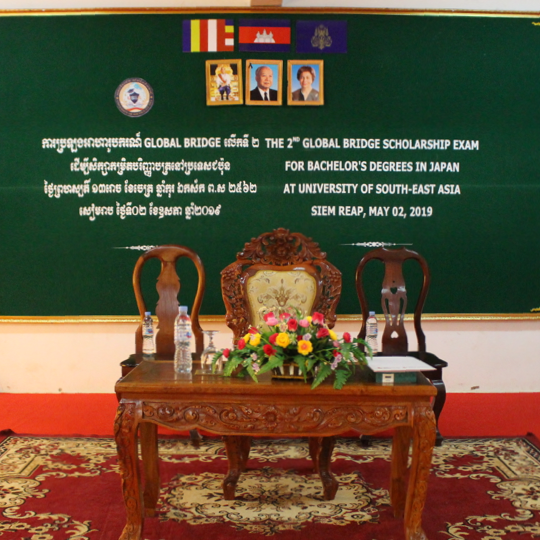 Purpose of the Scholarship

This Scholarship was established to support those High school students who wish to learn at university by providing a subsidy to help cover the necessary tuition fees and living expenses. This Scholarship helps students to access educational opportunities while having a stable environment in which they may focus on their studies. We expect Scholarship students to make great contributions in both Cambodia and Japan in the future.

After passing the scholarship exam and entering university, you will learn Japanese and elderly care skills in parallel with studying at university. You will need to pass three exams: “the Japanese Language Proficiency Test (N4 or higher)”, “Nursing care Japanese language evaluation test”and”Nursing care skills evaluation test” that are held in Cambodia until or immediately after graduating from university. After graduating from university and passing the above three exams, you will work in a nursing home and office in Japan in order to acquire knowledge and skills related to the nursing care business. After 5 years of employment in Japan, you will return to Cambodia, but you can choose to continue working as a gbHD group employee or change to a local company at that time. If you continue to work in the gbHD group, we are currently assuming that you will start up and operate a nursing care business in Cambodia.
Click here for career plan chart
Click here for candidate data 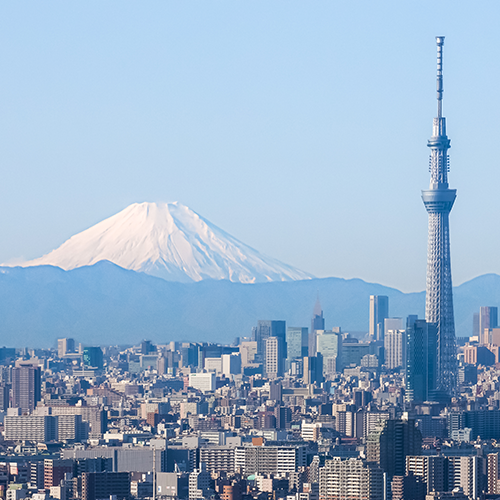 Do you know a country called Japan?
Because it is easier to understand, I will explain Japan compare with Cambodia. Japan is located about 4,300 km northeast of Cambodia.(The distance from the north to the south of Cambodia is about 400km.) Summer is as hot as Cambodia, but in winter there are cold areas where it snows. Comparing the land area of the two countries, Japan is 377,971 km2 and Cambodia is 181,035 km2. In other words, Japan is about twice as large as Cambodia.

Comparing the population, Japan is the world’s 10th largest country with about 126.52 million.Cambodia has about 16 million people.In other words, the Japanese population is about eight times that of Cambodia. Comparing GDP (Gross Domestic Product), which shows the country’s economic scale and production volume, Japan is about $ 5,760 billion. Cambodia’s GDP is about 20 billion dollars. Japan’s GDP is about 288 times that of Cambodia.Tokyo, the capital of Japan where I live, has a GDP of about $ 1,616.7 billion. This is the world’s best GDP by city.

Thus, Japan is a very large and rich country compared to Cambodia. However, Cambodia has grown in population and economy in recent years. It may catch up with Japan in the future. On the other hand, Japan is a country with a declining birthrate and an aging population that has been declining for about 10 years and will continue to decline.

In order to solve this population problem, our global bridge operates a lot of facilities in Tokyo, Osaka and the surrounding areas for taking care of small children and elderly people who cannot live alone.Internet technology: In order to increase the productivity of workers by using ICT and robot technology, we also provide services at a company called social solutions. In the future, I would like to make it a globally accepted company. So I am looking for excellent people to work with.Specifically, they are staff and managers working in future kindergartens and nursing homes, and system engineers who create robots.The nationality of the workers does not matter for us. 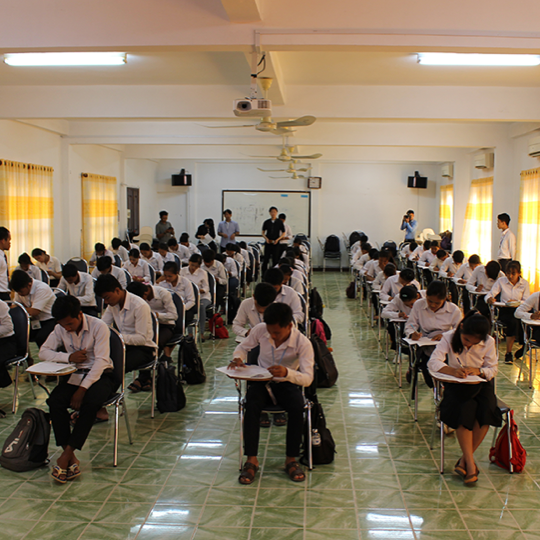 We have a relationship with Cambodia and go to employee training every year, and in 2018 we created a kindergarten in Sasarsdom.The global bridge scholarship started in 2018, and some students have already received the university. This year we would like to give more students a scholarship. Study a lot and get a high level of culture and Japanese at university. After graduation, you will work with us in Japan. We pay all tuition fees until graduating from university.

Students who pass this exam will surely be better off because they can graduate from university, acquire Japanese and English, and have experience working at a listed company in Japan.Scholarship recruitment is held every year. Please do your best for students who will take the exam next year and connect to the future.Please grab a good future with your own strength.

We are engaged in the elderly care business. Elderly care is to help people whose mind and body function have deteriorated due to aging or illness. We maintain and improve mind and body functions through support such as eating, bathing and excretion. We perform function training for the purpose of living an independent life. In Japan, where the aging rate is high, elderly care is one of the social issues. Cambodia currently does not have a high aging rate, but the average life expectancy is increasing, while the healthy life expectancy is about 10 years lower than the average life expectancy. The need for nursing care for the elderly is expected to increase in the future.